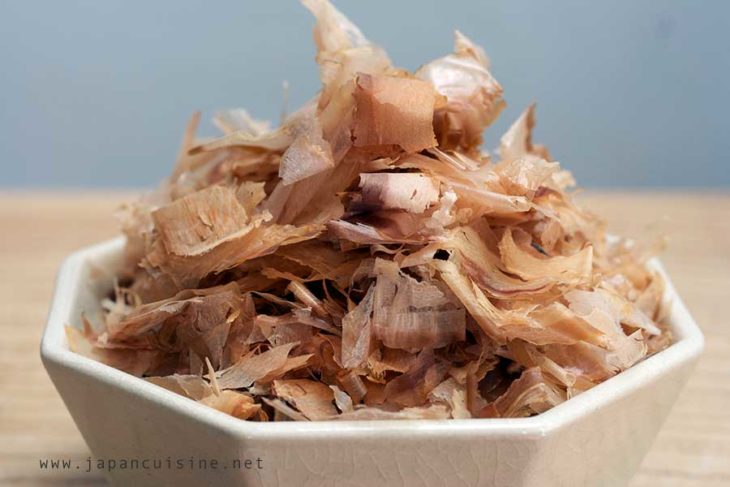 Katsuo is one of the pillars on which Japanese cuisine rests. The basic taste of many Japanese dishes is based on the unmistakable aroma of katsuo, like sautéed garlic and onion is for Italian cuisine.
Katsuo is a kind of fish, a type of tuna that remains small in size, very similar to bonito.

You can eat it fresh, raw or roasted in delicious recipes. However, its greatest use is dried, smoked and reduced to fine shavings. In this form its name is katsuobushi (鰹節).
From the whole fish they isolate four fillets, two dorsal and two ventral. Then they are smoked completely dry, with a complex process that also involves the development of a special mold.
Seeing them like this, on sale on the stalls of a Japanese market you would think they are just pieces of wood. Even the hardness is that of wood.

In this form you cannot eat it. Katsuo must be planed into shavings. Literally shavings, like the ones coming out of the carpenter’s planer, very thin and a bit curly.
The tool is basically a planer, upside down over a wooden drawer that collects the shavings from planing. It is a very refined handcrafted tool, made of fragrant Japanese cypress (hinoki), with very sharp wedge-shaped blades.
It is an instrument that unfortunately is disappearing in Japanese houses. Few people “grate” katsuo from a single block. Nowadays the vast majority of Japanese people buy at the supermarket the shavings, katsuo-bushi, ready to use in convenient bags of any size. It is certainly faster and more practical even if freshly “planed” one has a finer aroma. Just like grinding at the moment parmesan cheese, pepper and coffee.

The smoking process made with wood produces benzopyrene, a harmful molecule. Benzopyrene is also present in barbecue meat. In katsuo, however, it is in minimum quantities but still above the levels EU regulations allow. It is therefore not possible to import katsuobushi from Japan.
In some eastern shops you could find bags of katsuo arrived for who knows what trade routes.
Recently, in oriental products you can find katsuobushi produced in Spain by a Japanese owned company, complying with all European regulations.

The taste of katsuo is very special. The taste of fish and smoke balance very well without overpowering each other. The final result is an extremely fragrant, intense and savoury aroma and taste, so much so that the use of katsuo is mainly as a seasoning agent and to give the typical flavour of Japanese cuisine called umami.

How to Use Katsuo

Katsuo is a key ingredient in many Japanese recipes. They use it to give flavor, sprinkling it in a rather similar way to what you do with grated cheese. You put a large handful of it on okonomiyaki, or takoyaki. Just a pinch on yaki-soba, udon, tofu, often combined with thinly sliced chives (negi) or, together with sesame, on boiled vegetables.

Katsuo has another important role in Japanese cuisine. Together with konbu seaweed, it is the ingredient for basic broth, dashi (だし), which is then used in many recipes: miso soup, oden, nimono, soba, udon, etc.. The most refined cooks, depending on the taste required by a preparation use different types of katsuo. The upper fillets, leaner, give a more elegant and delicate taste. Those obtained from the lower fillets, which are fatter, have a more intense and strong taste. In these cases, the shavings are planed thicker, or in the shape of “splinters”, to be immersed in boiling water, in which the dry konbu has rehydrated. The thickness of the chips can also influence the final taste.
Those who want to try their hand at preparing dashi can easily use the simple katsuo shavings you can buy in oriental food shops.