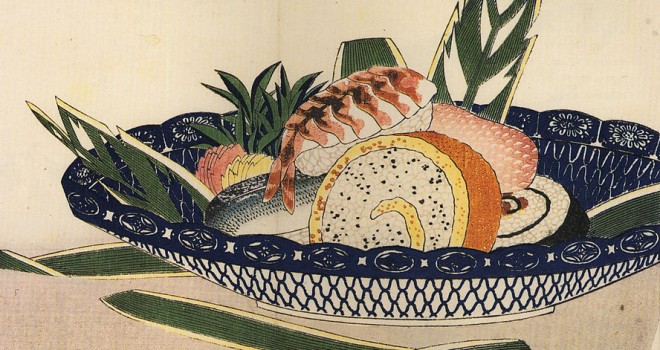 It will surprise many sushi lovers to know that their favorite dish of Japanese cuisine actually has no Japanese origins.
In fact, many of the founding elements of Japanese culture, not only culinary, have foreign origins.
Ramen, tofu, tempura, but also Zen Buddhism or bonsai are all imported to Japan from foreign countries. Then over time they changed so much, adapted to Japanese taste and style that they became something very different from the original form, and can be safely considered properly and originally Japanese.

At the Origin of Sushi

The origins of sushi date back to the fourth century AD. In various areas of Southeast Asia there was a particular method of preservation. Fish that was gutted, salted and placed in the middle of cooked rice. The rice fermented, createing an acidic environment in which bacteria couldn’t develop and fish could keep for months, transported and stored. When they ate fish, however, they threw rice away.
This technique of preserving fish came to Japan from China or Korea along with rice cultivation. In some regions it is still in use under the name of Narezushi or Funazushi depending on the area of production and the fish used.e

With the Muromachi period (1336-1573), fermented rice was no longer thrown away but eaten together with fish. This type of sushi took the name Namanare. Sushi was gradually changing from a simple method of preserving fish to an actual recipe. The Japanese developed a taste for this semi-cooked fish together with acidulous rice. People began to reproduce this type of combination not by fermentation, but by adding vinegar to boiled rice.

We then move on to the Edo period (1603-1867), the long age in which Japan remained almost completely isolated from the outside world. Many of those socio-cultural aspects that still characterize modern Japan formed and consolidated in this period.
In Tokyo (Edo was the ancient name of the Japanese capital), a new way of preparing sushi began to spread. It was the haya-zushi, literally “fast sushi”. They no longer waited the fermenting rice to sour, but mixed the boiled rice with vinegar and added fish, vegetables and other ingredients. Even today, similar Japanese recipes such as chirashi-zushi are still very popular and appreciated.

The Birth of Modern Sushi

Nigiri-zushi (“nigiri” means to squeeze in the fist) consisting of a dumpling of rice topped with a slice of fish, was born in 1800s, among the many stalls selling street food in an already hectic Tokyo-Edo. The fish that was unloaded in the port of Tokyo, together with the nori and rice that flowed into the capital, were assembled into the characteristic shape.
Hanaya Yohei (華屋 与兵衛), one of many sushi stall owners in the mid-nineteenth century, is more or less unanimously considered the inventor of nigiri.
It was still something quite different from the sushi people eat today. The lack of refrigerators required the fish to be marinated in soy sauce and salt, so that it could last. They added wasabi to cover any unpleasant flavors of the fish that, without ice, wasn’t always fresh.
In Japanese there is still the expression “Edo mae zushi” (江戸前寿司) that is “sushi in front of the Edo bay”. It means that sushi is a typical and original preparation from Tokyo.

A characteristic of the Japanese language is that the same word can be written with different ideograms.
Today the most common ideogram for sushi is the one in the image.
Originally perhaps the word was 酸い (sushi) which means sour, acidic, and referred to the taste of sour rice. In Edo era it was written 鮨, while in Osaka it was 鮓. Pretty common is also the writing in phonetic characters すし.

The Diffusion of Sushi

In 1923, a tremendous earthquake and the devastating fire that followed almost completely destroyed Tokyo. The immense reconstruction work that followed attracted workers from all over Japan. They soon learned to appreciate this typical dish of the capital, contributing to its spread nationwide.
After the war, sushi reached what is still its current form. For obvious hygienic reasons they stopped selling it on the street and quickly became a luxury dish.

Kaiten Zushi – Turning Point in the History of Sushi

The next turning point came in 1958. The manager of a sushi restaurant, Yoshiaki Shiraishi (白石義明), trying to lower costs and make sushi a dish for everyone, invented kaiten-zushi (回転寿司). Apparently the idea came after a visit to the Asahi brewery. Mr. Shiraishi was impressed by the way the beer cans moved on conveyor belts and decided to introduce a similar system in his Osaka restaurant, Genroku (元禄寿司). In the kaiten-zushi, lettarally rotating sushi, the saucers with the sushi on them spin on a conveyor belt in front of the counter. Customers can take themselves anyone they like. This system could reduce the staff involved in cooking and service, thus reducing costs and making sushi a popular dish.
Genroku-sushi was so successful that Mr. Shirahishi quickly opened over 250 similar restaurants throughout Japan, making sushi a popular dish.
Mr. Shirahishi, who in the meantime had designed a machine for automatic nigiri preparation, passed away in 2001, but the first Genroku-sushi restaurant still exists, near the north exit of the Kintetsu lines at Osaka Station.

Sushi as an International Dish

In the 1980s Japan was at the height of the economic boom. At the same time, the rest of the world rediscovered Japan and Japanese culture spread again to the West. The first Japanese restaurants and sushi bars were born in the United States, frequented by yuppies and fashionable people.
The rest is recent sushi history, with Japanese cuisine spreading rapidly throughout Europe and the rest of the world, thanks to an increasing focus on healthy food, low fat, calories, etc.

Do you enjoyed our sushi history? Do you like sushi? What is your favourite? Let us know in comment section.