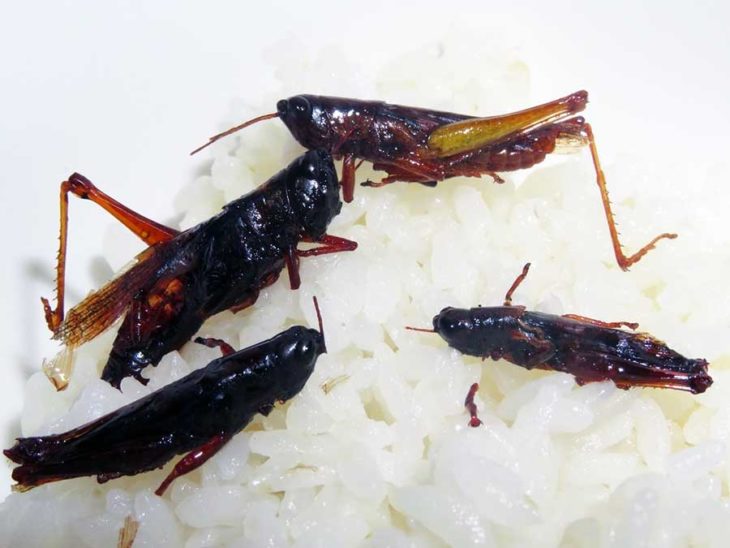 In this post we will talk about the 10 most disgusting foods of Japanese cuisine. Some of them you probably didn’t even imagine were edible.
If you thought that Japanese cuisine was all refinement, elegance, delicate and sophisticated flavors, you’ll have to reconsider. And maybe you will be curious to try them when you travel to Japan.

The Romans used to say de gustibus non disputandum est: that is, one should not argue about other people’s tastes.
This classification is based on my personal judgment and to some extent on the most common Western food tastes and taboos. All of which are totally subjective. So I invite you to try the dishes on this list if you ever get the chance. They may not be so bad for your taste, and you may even like them.
Let me know your experiences and opinions about these Japanese foods in the comments.

Jellyfish, which everyone is terrified of when they go swimming in the sea, are eaten in Japan. Of course you cannot eat any jellyfish that you pick up on the beach. Only a few species are edible and can also be bred for this purpose.
They only eat their umbrella. The preparation is long and laborious and normally you buy them ready to eat.
They are cut into thin strips and eaten like this, with a few drops of soy sauce.
In reality the disgusting thing is above all the idea of eating a jellyfish because they have practically no taste. I think the Japanese appreciate the jellyfish especially for the particular rubbery texture.

Sometimes, when diving into the sea, we can see some oblong shaped beings lying on the sandy bottom. They are the holoturias. Because of their appearance they are also called sea cucumbers, or with other less flattering epithets. The ideograms they are written in Japanese mean “sea rat”.
The Japanese also eat these. The texture is even more rubbery and leathery than jellyfish. The taste has a vague hint of ammonia, which makes them quite disgusting. They are also eaten raw cut into thin slices.

Whaling is a very controversial subject in the West. Japan is one of the countries that are allowed exemptions from the international regulations protecting cetaceans. The capture should be for scientific research, but it happens to see whale meat on the counters of Japanese supermarkets.
For a Westerner, whale meat is a kind of food taboo, a bit like dog meat. Partly because of ethical issues, partly because this food has never really been part of our culinary tradition.
But what does whale meat taste like?
It’s not very good, actually. It’s somewhere between meat and fish. Imagine eating a beefsteak with a briny finish. When it’s lean it’s awfully stringy. Scientific studies say it’s not even very healthy. The Japanese themselves don’t like it. The relationship between the Japanese and the consumption of cetacean meat is complex and controversial. Maybe we’ll talk about it in a dedicated post.

A mixture of molluscs, mainly squids, with all the entrails, salted and fermented raw. The result is a dense and filamentous mush in which soft pieces of squid swim, all with a very strong smell of bad fish and a very salty taste. Even for many Japanese it is difficult to deal with it and in fact shiokara is often accompanied by shots of whisky, shochu and other spirits that quickly wash away the taste of the swallowed bite.

It’s the sperm sacs of some fish like cod, tuna, puffer fish. They are eaten in various ways: raw, grilled, stewed (nabe).
More than the taste, delicate and pleasant, it is the idea itself that has a certain impact.

Natto is soybeans boiled and fermented in the presence of some particular bacteria. It covers with a kind of mould which, when mixed together, turns into a filamentous substance and takes on a pungent odour reminiscent of brewer’s yeast.
Apparently, it is extremely healthy. It is a typical Japanese breakfast food.
Personally I like natto, and I find that all in all it doesn’t have such an unpleasant smell and taste. But there are many westerners, and even some Japanese, who find it absolutely disgusting.

It’s probably the food the Japanese are most attached to. What they take on trips abroad for when they’re homesick. Umeboshi is a variety of Japanese plum (ume), picked while still unripe and preserved in salt. For Western palates, it is the limit of bearable in terms of salty and sour taste.
If you want to know more about umeboshi you can read this article.

Yakitori are barbecued chicken skewers and are one of the tastiest dishes of Japanese cuisine.
They are made with every part of the chicken. There are breast yakitori, thigh yakitori, heart yakitori, liver yakitori, gizzards and even cartilage yakitori.
There is also a special yakitori made of chicken skin alone. And it’s nauseating.
I know chicken skin when it’s well browned and crunchy is delicious. However, the skin stacked on a skewer turns golden and crunchy on the outside, but it remains soft, greasy and rubbery on the inside. It’s really disgusting.

Staying with the chicken, the Japanese also eat it raw, which is not only disgusting, but also very dangerous. In fact, chicken meat can transmit very serious diseases to humans, the less serious of which are tetanus and salmonella.
For some years it has been forbidden to serve raw meat in Japanese restaurants. Since it has caused lethal food poisoning.
Yet you can still find places that serve, more or less legally, raw chicken meat and liver, seasoned with at most a few drops of soy sauce.
Those who serve it obviously ensure that the meat comes from a very controlled supply chain, from animals bred and selected to be eaten raw.
The taste wouldn’t even be bad, but chewing a bite of chicken meat, cold and a bit slimy, knowing that you could catch some bad disease is not at all pleasant.

They are a specialty of Nagano and Gunma, mountain territories where fish and other fish products once did not arrive.
The grasshoppers (but also other insects and larvae) are cooked in a mixture of soy sauce and sugar that caramelizes them, making them crunchy and with a bittersweet taste.
Apart from a strong taste of soy sauce and the sweetness of sugar, they don’t taste much else. But they scrounge under the teeth and serrated hoes tend to scratch the palate and gums. Definitely not much. They say insects will be the food of the future that will save the planet. But as long as we can do without them…