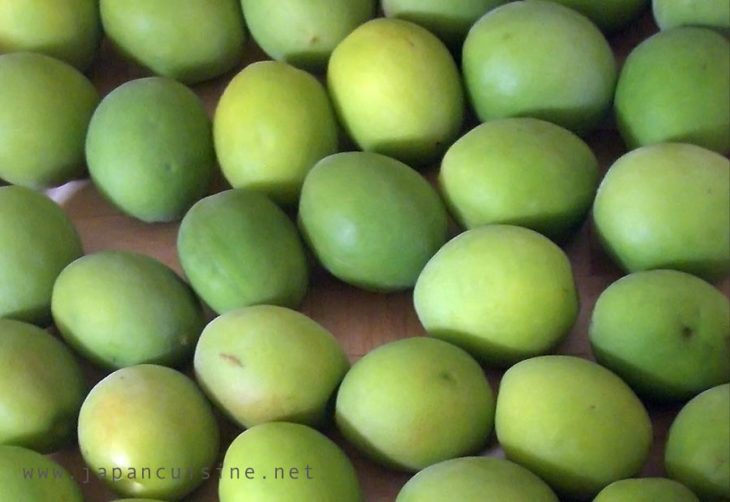 Ume is a kind of plum, ingredient of some of the most important preparations of Japanese cuisine such as umeboshi (梅干し) and umeshu (梅酒).
The first one is a kind of pickle made with ume, one of those things never missing in the suitcase of a Japanese traveling abroad, for vacation or work. It is what, together with miso-shiru, gives him some comfort when he is homesick. The second is a sweet and aromatic liqueur that the Japanese drink at the end of a meal.

If you look at it closely, the fruit of the ume looks like a strange hybrid. It has the shape of a small plum, the sparse down on the skin typical of an apricot and the pitted stone reminiscent of peaches. They harvest it around June, just before it begins to ripen, and process and preserve it in various ways.

The tree and the ume flower are very important for Japanese culture. Second only to the legendary cherry tree, the sakura. The ume tree is the first to bloom, bringing an early sign of spring already in mid-end of January. To tell the truth it is not easy to distinguish between ume and sakura, except for the different flowering period and the edge of the petals. In the cherry one is split into two lobes while in the ume is uniform. Small trees and bonsais of ume are brought into the house for o-shogatsu (Japanese New Year’s celebration). If, thanks to the internal warmth, they bloom it is a good auspice for oncoming year. Depending on the variety, the colours range from white to red, with all intermediate shades.

The ume flower, with five petals, is the symbol of Sugawara Michizane, an important figure from the Japanese Middle Ages. He was victim of a palace intrigue at the Imperial Court in Kyoto, and exiled to Kyushu. Legend has it that, while he was in exile, some flowers of his beloved ume came to him from the gardens of Kyoto, carried by the wind. After his death he became a god: Tenjin Sama. He is worshipped, in special temples called Tenmangu, in whose gardens grow ume trees. Tenmangy temples are all over Japan. He is the god of intelligence and patron of students who pray him before important exams.

The symbol of Tenmangu temples, dedicated to the deity Tenjin Sama, is a kamon (Japanese familt crest) depicting a stylized ume flower.

Flowering at the end of winter, the fruits are already big around June when they harvest them still unripe. I’ve never seen a really ripe one. Sometimes, if they stand too much on the supermarket counter, they tend to turn yellow or orange red. Some Japanese say they’ve seen some mature ones but even when they’ve turned a nice color they are still unpalatable.
In June, Kuromon market stalls fill with wonderful Nanko-ume (南高), the most prized variety grown in Wakayama. A greengrocer there once told me that the custom of picking them unripe spread because of the tsuyu. It is a monsoon that strikes the Japanese archipelago between spring and summer. In order not to lose the harvest due to the heavy rains, growers started to harvest them still unripe and developed systems to preserve them as that. Elsewhere, I read that it was introduced, along with recipes for preserving it, from China together with Buddhism, ideograms and many other things. However, the ideograms that indicate the rainy season in Japan, tsuyu (梅雨), are those of ume (梅) and rain (雨).
Mature or not, fresh ume may be inedible but they have a fragrant and intoxicating scent that reminds vaguely, just to give an idea, that of the green apple.

When the fruits turn yellow (but still unripe) are put in brine with plenty of salt and red shiso leaves. At the end of the process they take on a purplish red colour and turn into umeoboshi. It is probably the most inedible thing in all Japanese cuisine. They have a sour, salty and harsh taste at the same time. Wakayama ones are an exception, since honey is also part of the preparation and give them sweeter and more approachable taste.
There are endless regional and even family variations of umeboshi. There are still those who prepare it at home, even if there are fewer and fewer of them.
Japanese eat umeboshi as an accompaniment to plain rice (gohan). They put it in the bento to preserve it fresh for longer. It is the ingredient of sauces to season meat. They put it in shochu (焼酎 – Japanese spirit) together with hot water in a kind of strange cocktail. It is also a flavour of chewing gums and candies. It is such an important ingredient in Japanese cuisine that it probably deserves a post in the future.

The other very important use of ume is in the preparation of umeshu, the ume liqueur. The still green fruits are washed, dried and left to macerate for a few months in alcohol and sugar. The umeshu preserves all the scent of fresh ume, and when diluted with cold water and ice, it is a thirst-quenching summer drink.