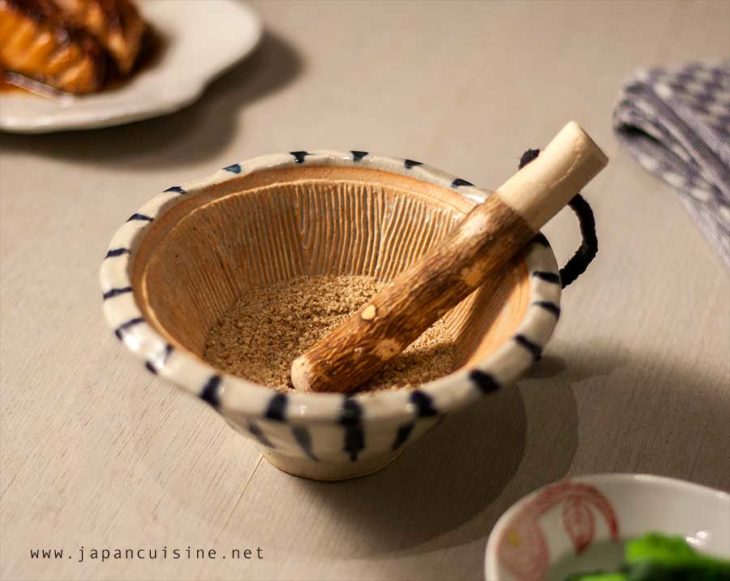 The suribachi is a mortar and pestle even if it works a bit differently from the western one. It is a rather wide bowl whose internal side and bottom are covered with narrow oblique grooves of a certain depth. It comes with a wooden pestle called surikogi. By rotating the pestle inside the bowl you can crush what is inside. Literally suribachi means “grinding bowl”.
Suribachi is commonly used to grind sesame seeds (goma) that are used to season various sauces and dishes of Japanese cuisine.

Another typical use of suri-bachi is to reduce the nagaimo to mush. The tuber is washed and peeled, and then turned on the bottom of the suribachi just as if it were the pestle. Its tender pulp becomes a soft filamentous cream that you can put directly on plain rice (gohan) or used in other Japanese recipes.

The pestle (surikogi) is often made of sansho wood (Sichuan pepper). In this case they leave part of the bark on the wood of the pestle. The pestles are used for years, progressively reducing to small butts, demonstrating with their ever-smaller size the length of service.

Suribachi comes in various sizes and models. The most common one, for everyday home use, has an outer covering in brown or light green ceramic.

You can find it in any supermarket or household store in Japan in various sizes. Prices for the simplest models are low. There are also more sophisticated, decorated ceramic models that can become a stylish and useful souvenir from a trip to Japan.

Some have a spout so you can prepare and pour sauces and condiments more comfortably directly from it.

In some Japanese restaurants, on the table each customer has a small personal suribachi so he can decide the quantity and degree of grinding of sesame seeds.

For some years now, you can also find it quite easily in the West, both online and in natural products shops. Many people use suribachi to prepare gomasio, which for some reason is becoming quite popular here. The gomasio is a sesame-based condiment ground with suribachi and salt. The correct pronunciation of gomasio is as if it were written “gomashio”.

Suribachi can also be useful in the preparation of western dishes. For me, for example, it has become indispensable in the preparation of sauces to season fish. I grind inside a suribachi a clove of garlic, a few grains of pepper, a pinch of coarse salt, sage or rosemary with plenty of oil and a splash of lemon. The result is a great seasoning with the right consistency, ideal both on roasted and boiled fish.

In Japanese, the phrase “goma wo suru” (胡麻を擂る) literally means ” grinding sesame” but is used to indicate a person who is flattering someone in order to get a favor. When someone says this expression, he usually makes a gesture of the hands imitating the use of suribachi. One hand does a rotating movement, as if holding the pestle, over the other hand held as a cup.

The one above is one of the most iconic and representative pictures of World War II. It depicts a group of American soldiers raising an US flag. The photo was taken at the end of the battle of Iwo Jima, an island at the southern end of the Japanese archipelago. This small volcanic island with an airport in the middle of the Pacific Ocean was a point of extraordinary strategic interest. For the Japanese it was one of the last bastions to defend the main islands of the archipelago from invasion. For the Americans it would have been a convenient base closer to the targets, from which to launch the bombers more frequently. The battle was very violent, with heavy losses on both sides and ended with the American victory.
The photo was carefully staged and taken on the highest relief of the island. It is and extinct volcano with a particular shape that recalls the typical Japanese mortar: Mount Suribachi.