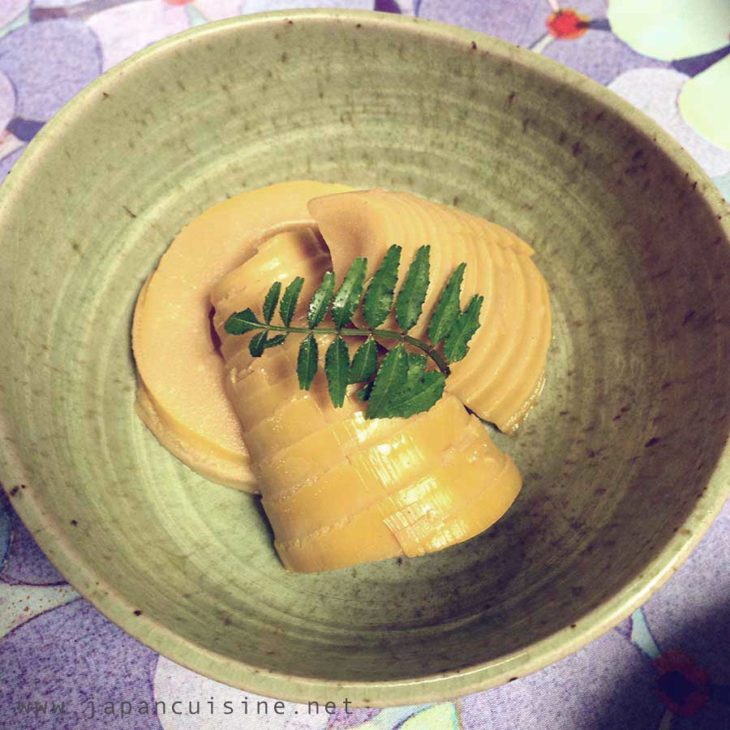 I’m sure that almost everyone, at some point in their lives, ordered a plate containing bamboo shoots. Probably at some Chinese restaurant. I believe that very few of them, after the waiter served them the dish, were able to recognize the bamboo shoots in the mixture of ingredients in front of them. And I’m sure there are even fewer those who, even if they knew what it looked like, would be able to recognize it when they ate it in a blind tasting.
Unfortunately, in most cases, what we found here are chopped and canned bamboo shoots with a soft texture and the watery, sour taste of the acidity corrector of the brine in which they are soaked.
Bamboo shoots, on the other hand, are a refined delicacy widely used in oriental food. In Japanese cuisine, as often happens, they are appreciated not only for their delicate taste, but also for their characteristic texture.

Bamboo shoots in many ways are similar to asparagus, in the sense that in spring they sprout from the ground in the clearings on the edge of the bamboo forests. In Japan there are real forests where bamboo stems reach considerable diameters and heights. As a result, bamboo shoots are also quite large.
They sprout from the ground and then very quickly grow to become a new plant, just like asparagus. Within a few weeks they can grow several metres high.

The Japanese love it, and they often go to the countryside to “make sprouts”, a bit like in people in some countries in spring go to make wild asparagus. Many bamboo forests are fenced in to prevent passers-by from picking them up. Also because bamboo shoots are not exactly cheap.

The period varies according to the temperatures of the season, but generally it is between the end of March and the beginning of May.
You should pick them as soon as possible, when they are still largely underground, before tissues become woody and tannic. Dug it alongside the bud to where they graft onto the root of the mother plant and there cut it. Don’t worry too much, bamboo is an infesting plant.

For some years now, bamboo groves have started to appear in the West too, planted for decoration or for commercial purposes, for fibre, as a material for furniture, construction and for food too. Even if the one for feeding is the giant bamboo, the shoots of the smallest varieties too can be consumed. If in springtime you happen to see some Asian man walking with his head down around a bamboo hedge, he is probably looking for shoots.

If you happen to get some fresh, raw shoots, I’ll explain how to cook them below.

How to choose Bamboo Shoots

The bamboo shoots must be very fresh. The outer leaves must be smooth, compact, perfectly adherent to each other, dark brown in colour, covered by a thick, short, regular down.

Wash it thoroughly without peeling it. Use a brush to clean any dirt that is difficult to remove.

Using a very sharp knife cut the tip of the shoot obliquely as shown in the picture above.
Then, from the centre of the oblique cut, cut the layer of leaves vertically. The incision must be deep enough to open the leaves without reaching the pulp of the bud.

Put the bamboo shoot in a large pot together with a couple of large handfuls of rice bran and a couple of dry chillies. The bran and chili pepper, according to the Japanese housewives who still prepare it at home, “purge” the bamboo shoots of the bitter taste (aku – 灰汁) that it might have. If you can’t find rice bran, you can use wheat bran.
Cover with water and bring to the boil. When the water boils, cover with an otoshi-buta (落し蓋 – wooden lid smaller than the opening of the pot) and continue cooking checking from time to time that the water level does not drop too much.

The cooking time depends on the size of the sprouts.

Turn off the fire and leave everything still until it is completely cooled.
Wipe off the bran. The leaves should come off very easily showing the heart of the bud smooth, with nice pale yellow colour.
The bud is ready to use. You can eat it like this, with a few drops of soy sauce, or use it in many Japanese recipes.
If you don’t eat it right away, you can keep it in the fridge in a bowl of water for a few days.

The taste of freshly boiled bamboo shoots is fragrant and delicate, but not easy to describe. It’s somewhere between stewed cobs and chestnuts and boiled thistles and artichokes.
The texture is that of stewed artichoke bottoms.