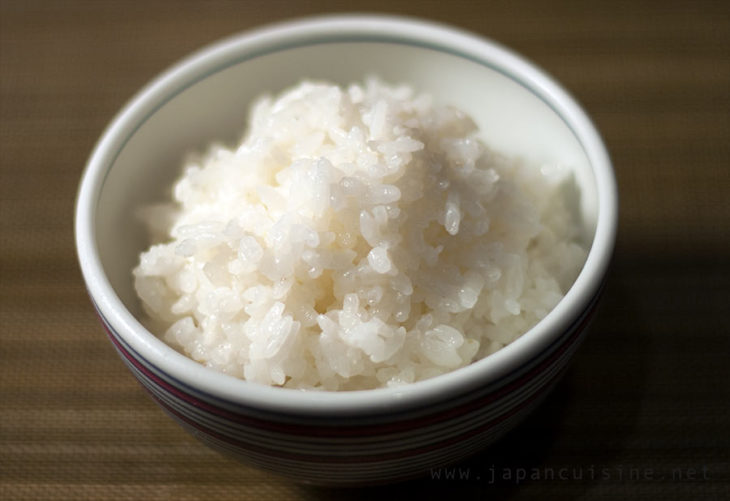 In Japan, plain rice is the same as bread in Western cuisine. Rice is the basis of almost every meal in Japanese culinary tradition.
In Japanese language there is a word for raw rice, “o-kome” (お米), and a different word for cooked rice: “gohan” (ご飯). It is so important in Japanese food culture that “gohan” is synonymous with meal, food in general. Asa-gohan (朝ご飯) is in fact the meal of the morning, i.e. breakfast, hiru-gohan (昼ご飯) the meal of the day, i.e. lunch, ban-gohan (晩ご飯), the meal of the evening: dinner. Hardly a bowl of white rice is missing from any preparation of Japanese cuisine, be it grilled meat, roast fish, raw fish, just as bread is always on the table in Western countries.

Japanese rice is short grain, very refined and perfectly white, pearly, almost translucent.
The taste is strictly non-aromatic (and how many people use Basmati for Japanese recipes), neutral, clean but fragrant in the mouth.

In Japan there are obviously hundreds of varieties of rice. There is one type of rice for the production of sake, one for mochi, one toasted and mix with tea (gen mai cha). Even to prepare the simplest white rice there are numerous cultivars often with evocative and poetic names such as “love at first sight”, “light of silk”, “dream brocade”. Koshihikari (こしひかり) is the most cultivated and appreciated variety. It accounts for more than a third of Japan’s entire production and is also exported. Akita komachi (秋田こまち) and Hitomebore (ひとめぼれ) are also very popular. Often each family has its own favorite type of rice, sometimes it comes from its home town in the countryside of Nigata, Akita, Kyoto, where according to tradition there are the best qualities.

In the preparation of Japanese style plain rice, cooking is obviously very important.
One of the most obvious differences compared to the preparation of rice in the West is the fact that the rice is thoroughly washed and left to soak before cooking.
Another difference lies in the fact that the rice is not cooked and drained as is often done here to make plain rice, but is put in the pot with only the amount of water required for cooking that will be completely absorbed.

Automatic rice cookers are now very popular in Japan.
They are gadgets similar in shape to those bread-making machines that are spreading lately. You put rice and water in a pot. Specific marks indicate exactly how much water to put in relation to the quantity, the variety of rice and the type of consistency you want to obtain. You set the timer and the machine does the rest, ensuring not only perfect cooking but also keeping the rice at the right temperature for a while once it is ready. In Japan there are hundreds of models, from the cheapest for a few tens of euros to the most sophisticated, produced with cutting-edge materials and technologies that promise exceptional cooking and can cost even more than a thousand euros. In the rest of continental Asia, a Japanese hi-tech rice cookers is a true object of desire and status symbol.

In the usual Chinese emporiums in the West, you can find some of these rice cookers Made in PRC.
If instead you decide to buy an original one in Japan keep in mind that the voltage is 110V and, depending on your country you might need a powerful current transformer.

In Japan, for some years now, the traditional method for cooking gohan has been returning in vogue. It is a kind of glazed terracotta jar, similar to those used for cooking cereals, legumes and preparations that require a mild, constant and uniform fire.
In the Japanese plain rice model there is a double lid system that allows the venting of boiling and excess steam while maintaining a constant temperature.

In any case, with some care, the Japanese white rice can be easily cooked in a normal steel pot, better if it has a thick bottom.

Like all simple things, Japanese style rice in white is a preparation that needs attention to detail and experience to succeed well. The varieties of rice are not all the same and the water absorption can vary depending on the types used. It is therefore important to test and, for progressive adjustments, find the right balance of water and rice.
At the end of cooking, the grains must maintain a minimum consistency, but they must agglomerate with each other in a soft compound that is compact enough to be eaten using the sticks.
Take a grain between your index finger and thumb. It must have consistency, but by pressing it you must crush it without difficulty.
If emptying the pot the rice leaves a thin toasted, straw-coloured layer on the bottom that comes off easily, it means that you have found the right amount of water. Before the introduction of rice cookers that do not burn the bottom at all, this residue, which has the consistency of a cracker, in Japanese families was often the cause of quarrels between little brothers who fought over it at the end of cooking.

Serve a bowl of hot, steaming Japanese style white rice with miso soup and a slice or two of grilled salmon. You will have the most highly representative meal of everyday Japanese home cooking.